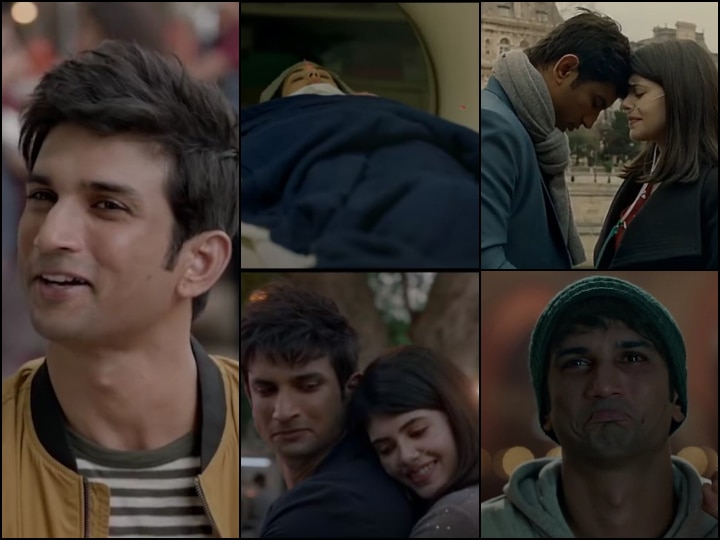 New Delhi: The wait is finally over! The makers of Sushant Singh Rajput starrer ‘Dil Bechara’ have finally unveiled the film’s trailer on Monday (July 6). Ardent fans of the late actor have been eagerly waiting for the trailer of ‘Dil Bechara’ ever since it was announced that Sushant’s last film will premiere directly on Disney+ Hotstar on July 24. The much-awaited movie, which will mark the Bollywood debut of Sanjana Sanghi, has been directed by Mukesh Chhabra.

The film focuses on the story of Kizie and Manny, who fell in love while bonding over movies and music. How can a love story be complete without any hurdles? While Kizie is battling cancer, Manny had a brush with osteosarcoma. The two lovebirds visit Paris together, which further strengthens their bond. Manny inspires Kizie to live life to the fullest and enjoy every moment.

The trailer of ‘Dil Bechara’ will definitely leave you teary-eyed as it has the perfect mix of romance, drama and emotions. There’s a reason why Sushant was considered as most of the brightest stars of younger generation. He displayed his acting prowess once again in the movie.

The dialogue, “Janam kab lena hai aur marna kab hai hum decide nahin kar sakte par kaise jeena hai vo hum decide kar sakte hain” (We cannot decide when to be born or die but we decide how to live) will make you emotional. Sushant’s screen-presence and his chemistry with Sanjana Sanghi are one of the main highlights of the film.

Sanjana took to Twitter and Instagram to share the trailer of ‘Dil Bechara’. She tweeted, “Here’s presenting to you, our labour of love. The #DilBecharaTrailer is out NOW! He was the one who healed her, and took away her pain by celebrating each and every little moment that mattered.”

The official handle of Disney Plus Hostar shared the trailer along with the caption, ” Dil Bechara is a story of Kizie and Manny, two ordinary people with an extraordinary love story. Both have a tragic twist to their lives. That was the start of exploring a funny, thrilling and tragic business of being alive and in love Kizie and Manny embark on an, on and off, up and down, bitter and sweet profound journey into the heart of that crazy little thing called ‘life’.”

Fans have not been able to control their excitement and they trended the hashtag #DilBecharaTrailer on Twitter.

‘Dil Bechara’ is the Hindi adaptation of John Green’s novel ‘The Fault in our Stars’. The film co-starring Saif Ali Khan was earlier titled ‘Kizie Aur Manny’. It was originally slated to hit the silver screens in May 2020. However, the movie couldn’t release on its scheduled date due to the COVID-19 crisis.

Watch this space for more updates!